Heroes are ‘born’ every day. A farmer who saves a child from drowning after it fell into a well can be called a hero. As can a noble knight who kills the evil dragon. Soldiers that fight in the galactic wars of the future each have their own story to tell and then, of course, there is the story of the modern tax advisor… Yes, everyone can be a hero, but some are more likely heroes than others. Or are they?

The Voidwalkers game system helps you build a character from scratch in a classic, modern or future setting without going too much into specifics about what kind of world you will live in. You could indeed choose to become a tax advisor but since you can be anything, you will probably be choosing to develop this tax advisor in a way that in the end will have little to do with its original mundane job. But, if you choose this ominous role, then beware: you are the tax advisor that will meet wonderful creatures in even more wonderful places, battle in a silent war or become a legend of your own right. Your background matters! Because as a tax advisor you might have excellent cognitive skills and a great sense for reading people’s minds and these might be the things you develop. Voidwalkers really lets you explore a lot of options when considering where you come from.

Why do things happen to your character and not to your imaginary neighbor? Because it wouldn’t be fun to play that neighbor. It isn’t an accident that specifically your character meets all kind of strange creatures. It is because you play that character. I am writing this down because often the mistake is made that too many coincidences happen to your character in roleplaying games. And your imaginary neighbor might actually agree. But from a meta point of view it is exactly this coincidence that made your character the exception in the neighborhood. The one in a million chance of an extraordinary tale has happened to him or her!

When considering this idea of why things happen to you, it is most often easier to accept new challenges ahead instead of opting out because you want to sit on the couch and watch television. It helps you agree to do missions for others and opens up a world where ‘yes’ really is the preferred answer to everything.

A role playing game like Voidwalkers is about having great adventures that really let your imagination get the better of you. Whatever you want to play, it is possible. Not all rules are there to support every option but that shouldn’t stop you. Add rules when you get the hang of some of the balancing and modify others for the same reason. Feel free to negate parts of this book that you really can’t be bothered with or expand other parts for the reverse reason. Above all: have fun with your friends. Together you will  build worlds. We now have three shows now that are well on their way! The Precipice of Dreams now has over 10 episodes! As does Talking Void. Parallel Projections is nearing that mark and our content is Read more 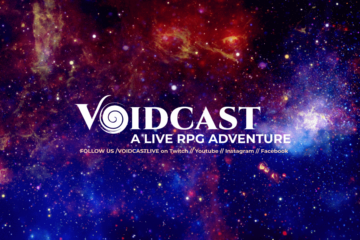 Well on our way!

Things have been good for us. Instead of just one, we now have three shows on Twitch.tv and, later in the week, as a VoD on YouTube.com. We are so proud of our products! But Read more 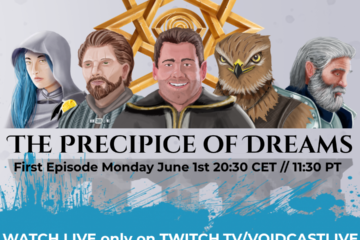 We did it! Our first episode

We are so proud! The title is ‘[DnD] The Precipice of Dreams 001: The Old Sword Inn’! We have been testing our live streams, our prologue to the adventure really, to a bunch of our Read more